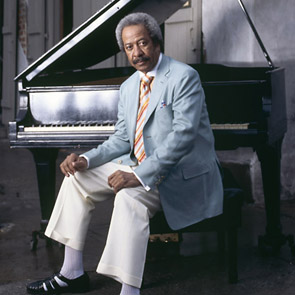 ALLEN TOUSSAINT: A SAINT FOR ALL SEASONS

We celebrate the songmaker, piano “professor” and producer from New Orleans who passed away suddenly in November, 2015. A beloved Creole gentleman, Allen Toussaint was a hometown hero and giant on the American music scene. He wrote over 800 songs and produced regional and national hit records such as “Java” (Al Hirt), “Mother-in-Law” (Ernie K-Doe), “I Like it Like That” (Chris Kenner), “It’s Raining” (Irma Thomas), “Yes We Can” (Lee Dorsey) among others. Toussaint worked closely with the Meters, Neville Brothers, Dr. John, Paul McCartney and Elvis Costello. He is in the Rock ‘n’ Roll Hall of Fame and received the National Medal of Arts. Allen Toussaint’s famed autobiographical song is “Southern Nights.”