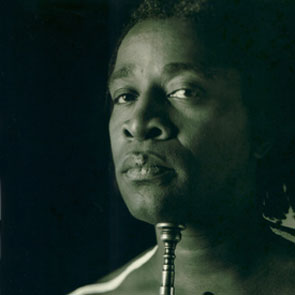 FROM THE SHOW: MARTIN LUTHER KING: SOUNDS OF THE SPIRIT

Trumpeter and composer Hannibal Lokumbe recalls memories of hearing music from a chitlin' curcuit club in his hometown and what happened the first time he bought music composition paper.

FROM THE SHOW: MARTIN LUTHER KING IN WORDS AND MUSIC

Trumpeter Hannibal Lokumbe was born Marvin Peterson, in Smithville, Texas in 1948. He talks about growing up near a chitlin' circuit club, and his 1979 trip to Africa in the midst of a life-threatening illness. His 1990 "African Portraits," tells story of the African American experience through time and music, using a full orchestra, a chorus, african drums, blues singers, a jazz quartet, and two operatic tenors.

The spirit of the late Civil Rights leader informs this bittersweet, but uplifting look back and ahead. Includes jazz pianist McCoy Tyner's reflections on great piano "professors," his own life in the avant-garde, and his musical and spiritual associations with the legendary late saxophonist John Coltrane. Plus a visit with jazz and classical composer/performer Hannibal Lokumbe regarding his "African Portraits" with the Chicago Symphony.

From the show "Classical Routes" originally aired on November 12th, 2003

From the show "Classical Routes" originally aired on March 5th, 2003

From the show "Classical Routes" originally aired on April 19th, 2006