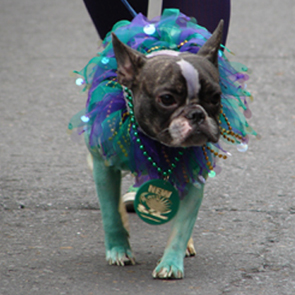 BARKUS appearing in 2 shows and/or playlists

EPISODES OF AMERICAN ROUTES WITH BARKUS

Let the hounds out for the only all-canine Mardi Gras krewe in New Orleans, Barkus, and vist with purple chihuahuas and minature schnauzers as they parade dressed to the nines.

As Mardi Gras rolls around again, visit the late king of Krewe du Vieux, R&B hero Ernie K-Doe. Ride high with the oldest women's Mardi Gras parade, Iris, and get down in the streets with a krewe of dogs in costume, Barkus. Plus Mardi Gras music makers in New Orleans, from Al "Carnival Time" Johnson to Rio's samba schools.